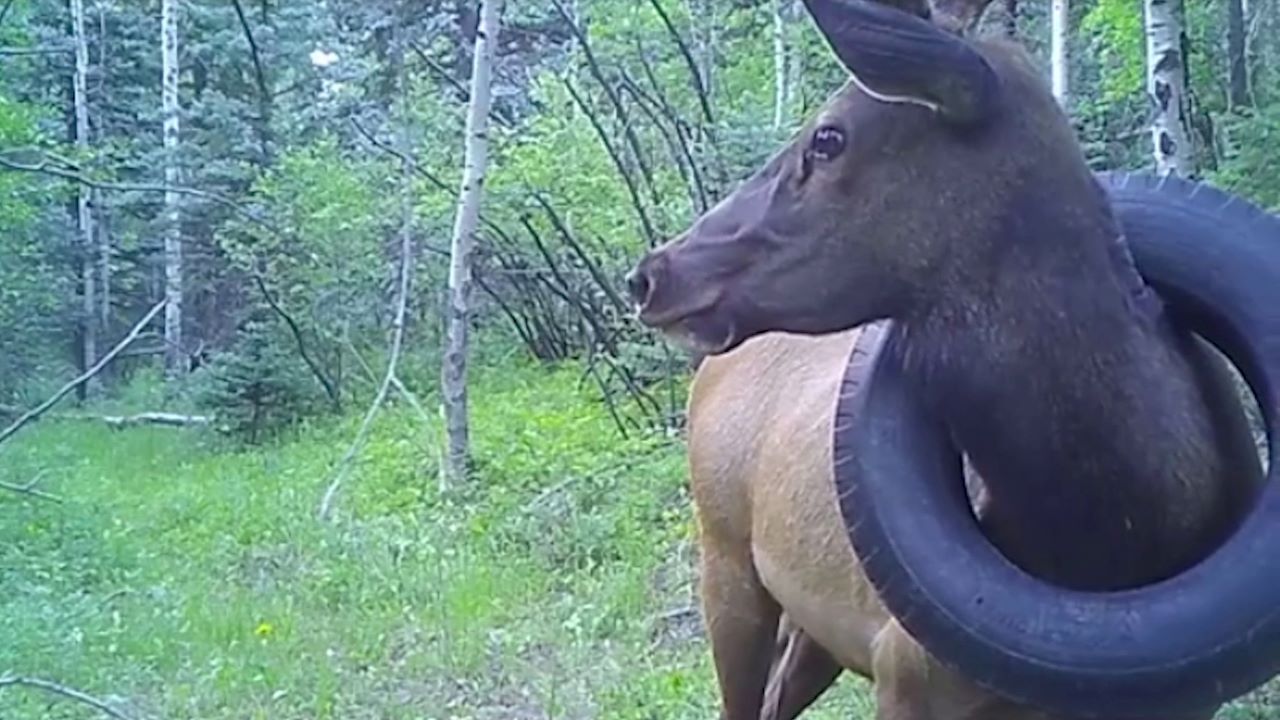 Colorado bull elk with a tire that has been around its neck for two years. Trail camera picture from July 12, 2020 (courtesy of Dan Jaynes near Conifer, Colo.)

PINE, Colo. – An elk with a tire around its neck for at least the last two years was finally freed Saturday evening when Colorado Parks and Wildlife officers were able to tranquilize the bull and remove the tire.

Wildlife officers Dawson Swanson and Scott Murdoch had to cut the antlers off the bull elk in order to remove the tire. That occurred Saturday around 8 p.m., roughly one mile south of Pine Junction on private property off of County Road 126.

“I am just grateful to be able to work in a community that values out state’s wildlife resource,” Swanson said. “I was able to quickly respond to a report from a local resident regarding a recent sighting of this bull elk in their neighborhood. I was able to locate the bull in question along with a herd of about 40 other elk.”

Wildlife officers aged the bull as a four-and-a-half year-old weighing over 600 pounds and had five points on each of its antler beams.

“It was tight removing it,” Murdoch said of pulling the tire off the bull’s neck, even after cutting its antlers off. “It was not easy for sure, we had to move it just right to get it off because we weren’t able to cut the steel in the bead of the tire. Fortunately, the bull’s neck still had a little room to move.

“We would have preferred to cut the tire and leave the antlers for his rutting activity, but the situation was dynamic and we had to just get the tire off in any way possible.”

Once the tire was off, wildlife officers Swanson and Murdoch were surprised to see the condition of its neck after having that tire on it for over two years.

“The hair was rubbed off a little bit, there was one small open wound maybe the size of a nickel or quarter, but other than that it looked really good,” Murdoch said of the bull’s neck. “I was actually quite shocked to see how good it looked.”

It was the fourth attempt wildlife officers had made in the last week to try to tranquilize this bull. Saturday evening, officer Swanson was in a neighborhood looking for this elk that was reported in the area earlier in the day. He found it in a group of elk and maneuvered into a location where he thought it was going to cross. Swanson was able to successfully tranquilize the bull. Murdoch arrived to aid in the removal operation before the two set him free, many pounds lighter.

“Tranquilizer equipment is a relatively short-range tool and given the number of other elk moving together along with other environmental factors, you really need to have things go in your favor to have a shot or opportunity pan out,” Swanson said. “I was able to get within range a few times that evening, however, other elk or branches blocked any opportunities. It was not until shortly before dark that everything came together and I was able to hit the bull with the dart. One the bull was hit with the dart, the entire herd headed back into the thick timber. This is where I was able to find the bull.

“Due to a number of factors, including the bull’s physical condition related to the rut, the tranquilizer effectiveness was minimized. I contacted (Murdoch) and along with some further assistance from neighbors, we were able to remove the tire and the bull was back on his feet within a matter of a few minutes after administering a reversal (to wake it from the sedation).”

Swanson and Murdoch estimated that the bull elk dropped roughly 35 pounds between the removal of the tire, his antlers and the debris that was inside the tire.

“The tire was full of wet pine needles and dirt,” Murdoch said. “So the pine needles, dirt and other debris basically filled the entire bottom half of the tire. There was probably 10 pounds of debris in the tire.”

This bull elk has spent the past couple of years traveling back and forth between Park and Jefferson Counties. He would disappear for long periods of time, particularly in the winter, and was acting as expected from a wild animal, not wanting to be around human presence. That is much different than some of the resident elk people often see in towns such as Evergreen or Estes Park.

At the end of May and into June 2021, four attempts were made to catch up with this bull in the Pleasant Park area of Conifer. Sightings of him picked back up in September and early October near the town of Pine (one of which you can see here in this video). Murdoch felt the rut (breeding season) played a helpful role in catching up with the bull.

“In the winter we weren’t getting any reports of him,” Murdoch said. “In the springtime, we would get an occasional report or see him in a little bachelor herd. The rut definitely made him more visible. There was a bigger bull in the group he was with on Saturday, but he is getting to be a decent size bull.”

The first time wildlife officers became aware of this elk with a tire around its neck was in July 2019 (click here to see a photo from that sighting). While conducting a population survey for Rocky Mountain bighorn sheep and mountain goats in the Mount Evans Wilderness, wildlife officer Jared Lamb saw the bull through a spotting scope.

At the time the bull appeared to be a younger one, likely two years old.

“Being up in the wilderness, we didn’t really expect to be able to get our hands on the elk just because of the proximity or the distance away from civilization,” Murdoch said. “It is harder to get the further they are back in there and usually the further these elk are away from people, the wilder they act. That certainly played true the last couple of years, this elk was difficult to find, and harder to get close to.”

Since the original sighting by wildlife officer Lamb, a handful of other sightings came in over the following year.

The saga of this bull elk highlights the need for residents to live responsibly with wildlife in mind. That includes keeping your property free of obstacles that wildlife can get tangled in or injured by. Wildlife officers have seen deer, elk, moose, bears and other wildlife become entangled in a number of man-made obstacles that include swing sets, hammocks, clothing lines, decorative or holiday lighting, furniture, tomato cages, chicken feeders, laundry baskets, soccer goals or volleyball nets, and yes, tires.

This elk would have gotten the tire around its antlers either when it was very young, before it had antlers, or during the winter when it shed its antlers. It could have been a big stack of tires that the elk stuck its head in, wildlife officers have also seen it where people feed animals who come in and put their heads in things that they then walk away with.